“Ed Sheeran appearing on game of thrones but not being brutally disembowelled was very disappointing.” Brandy Jensen following the cameo appearance on the hit TV show.

Handshake of the Week

Trump Macron 30 second handshake
“Tremendous… Battle of the Handshake, round 2: a full 29 seconds of pain. Trump looks to have won this one. Series score, 1-1.”

“Second 23. The look on Trump’s face. It’s so so good. I can’t get enough of it. I know it’s a darkhorse but it’s my favorite moment of the entire handshake.”

A second-by-second analysis of the Trump-Macron handshake by CNN.
View the video and analysis here

“I think of this Tom Baker story often. TV brings joy & comfort to a lot of people, why do some feel the need to belittle and disparage them?” 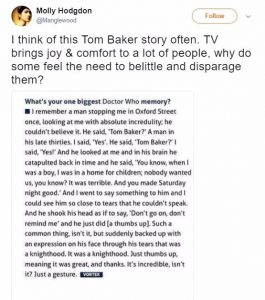 l remember a man stopping me in Oxford Street once looking at me with absolute incredulity he couldn’t believe it he said tom baker?’ A man in his late thirties I said ‘yes’ he said ‘Tom Baker?’ I said ‘yes!’ and he looked at me and in his brain he catapulted back in time and he said ‘you know when I was a boy I was in a home for children nobody wanted us you know? It was terrible and you made Saturday night good’ and went to say something to him and I could see him so close to tears that he couldn’t speak and he shook his head as if to say don’t go on don’t remind me and he just did a thumbs up, such a common thing isn’t it, but suddenly backed up with an expression on his face through his tears. That was a knighthood. It was a knighthood, just thumbs up meaning it was great and thanks it’s incredible isn’t it? Just a gesture.” 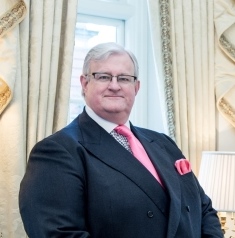 Leadership is becoming one of the key debating points and is as important as ever. We are delighted to announce an evening lecture from three illustrious characters that have been driving forces in different fields over the past two decades. They have kindly offered to share their thoughts, lessons and experiences on leadership.~

The Annual Awards of Excellence (AAE)

The Gala Dinner also celebrated a further 20 talented young chefs, pastry chefs and waiters, who successfully achieved the Royal Academy of Culinary Arts’ Annual Award of Excellence 2017 in finals held in May and June. 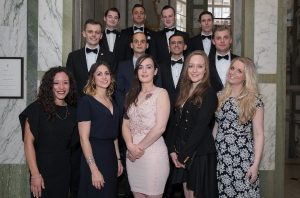 Americans to top $100 billion in vacation spending this summer.
Americans are spending more on summer vacations this year, topping $100 billion for the first time, according to Allianz. Read more here.

Hotels elevating guest experiences by creating mini-getaways.
As the ever-competitive hospitality market continues to heat up, hotels are looking for new ways to attract travellers and expanding on the way they do business—even with other hotels. Check out how here.

“The boom is therefore set to continue and we currently see no signs
of the investment market potentially cooling down in the short term.”- JLL Hotels & Hospitality