“When people start telling you that you’re crazy, you just might be on to the most important innovation in your life” 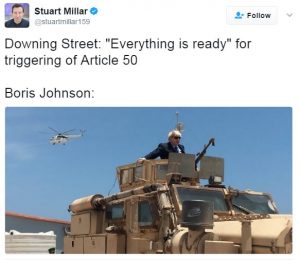 Downing Street: ” Everything is ready” for triggering of Article 50 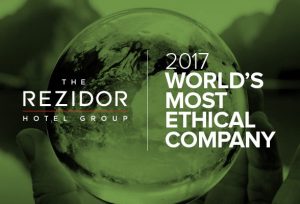 The Rezidor Hotel Group, one of the most dynamic hotel companies in the world and a member of the Carlson Rezidor Hotel Group, has been recognized by the Ethisphere Institute, a global leader in defining and advancing the standards of ethical business practices, as a 2017 World’s Most Ethical Company®.

Rezidor has been recognized since 2010 and is one of only three in the lodging and hospitality industry, underscoring the company’s commitment to leading ethical business standards and practices.

This is the 11th year that Ethisphere has honored companies that recognize their role in society to influence and drive positive change; consider the impact of their actions on their employees, investors, customers and other key stakeholders; and use their values and culture as an underpinning to the decisions they make every day.

“Over the last 11 years, we have seen the shift in societal expectations, constant redefinition of laws and regulations and the geo-political climate. We have also seen how companies honored as the World’s Most Ethical respond to these challenges. They invest in their local communities around the world, embrace strategies of diversity and inclusion, and focus on long term-ism as a sustainable business advantage,” explained Ethisphere’s Chief Executive Officer, Timothy Erblich. Congratulations to everyone at Rezidor for being recognized as a World’s Most Ethical Company.”

An electric dinosaur mans the front desk at a Japanese hotel 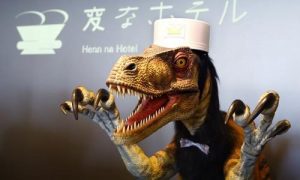 A motorized talking garbage can in the lobby collects tourists’ litter, hopefully without any trash talk. Like all the hotel’s robot employees, it’s fluent in Japanese, English, Chinese and Korean. Henn-na is also a keyless hotel, with doors opening via facial-recognition technology.

At least seven humans will be on hand at all times, in case their robot co-workers go haywire. With rates ranging from $123 to $265 a night, the hotel is 80 per cent booked for the rest of the month, officials said.

New sources of Asian investment buying European hotels: The lion’s share of Chinese and Asian hotel industry capital entering Europe of late has derived from publicly listed conglomerates, notably HNA Tourism Group and Jin Jiang International, but midsize players are trying to make a play in the region, as well.
Find out more

Marriott International announces new collaboration with career advancement startup Amavitae: Launched in 2016, Amavitae’s mobile-first career advancement platform addresses the skills and opportunity gaps of a new generation of jobseekers and empowers them to find a career they love.
Learn more

Barcelona clamps down on hotel development: Authorities in Barcelona have announced a ban on new hotels or visitor apartments opening anywhere in that city’s center, calling into question the future of its tourism and travel growth.
Find out more

The investment intensity index from JLL Reveals European Cities Are Still on Top but China and Australia Are Taking Strides: Asia Pacific cities are some of the fastest growing real estate markets in the world, but they have yet to catch up with their European and North American counterparts when it comes to intensity of investment.
Learn more

Save London’s high streets from business rate hike, urges mayor: Sadiq Khan fears for future of London’s vibrant and diverse character if family-run and independent shops are forced off the high street after 45% rise in bill.
Read more

A beachfront pop-up hotel opens in Tel Aviv: Located in a lifeguard tower on Frishman beach in Tel Aviv, this unusual hotel suite has been developed as part of a promotional campaign initiated by the Ministry of Tourism and the city’s municipality.
Learn more