James Hand suggested ‘Boaty McBoatface’ as the new name for a research ship which Britain’s Natural Environment Research Council asked the public to name. His suggestion, obviously a joke, has gone on to receive nearly 30,000 public votes. 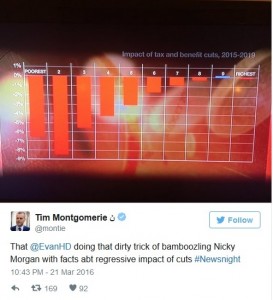 Evan Davis showed Nicky Morgan, Education Secretary and Minister for Women and Equalities a graph produced by the Institute for Fiscal Studies, which demonstrated the net gains and losses in the poorest and richest incomes, as a result of tax and benefit cuts over this Parliament.

Tim Montgomerie of The Times sent the tweet after the conversation between the two became awkward with Davis arguing Morgan doesn’t really know what the government is doing because she hasn’t been presented with the data. Morgan replied saying she doesn’t study the IFS figures.

How Airbnb designs for trust

Joe Gebbia, the co-founder of Airbnb, bet his whole company on the belief that people can trust each other enough to stay in one another’s homes. How did he overcome the stranger-danger bias? Through good design. Now, 123 million hosted nights (and counting) later, Gebbia sets out his dream for a culture of sharing in which design helps foster community and connection instead of isolation and separation. 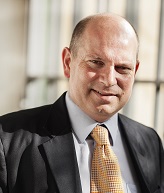 The AA has announced the appointment of Peter Laigaard Jensen as the new Head of AA Hotel Services.

Peter Laigaard Jensen’s hospitality career began in hotels in his homeland of Denmark where he worked his way up from washing dishes. His career then took him to work around the world in a variety roles including, Executive Chef, General Manager, Director of Services for a North Pole airforce base, Country Operations Manager for an international hotel chain and most recently as the Chief Operating Officer for a chain of four and five star hotels in Azerbaijan. This breadth of experience will be a great asset as he looks to grow the services offered by AA Hotel Services. 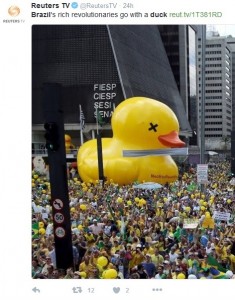 The giant inflatable yellow duck captures the anger of rich and upper-middle class Brazilians who have taken to the streets to protest against President Dilma Rousseff.

The 40-foot duck is related to the saying “To pay the duck” which in Brazilian Portuguese means to unfairly pay for someone else’s mistakes.

Since Rousseff took office in 2011, Brazil’s economy has gone from being one of the world’s fastest growing major economies to one of its worst performers, contracting by 3.8 percent in 2015, as the commodities boom ended and a wide-ranging corruption scandal hit investor confidence.