“Looking forward to going home, being a Dad and changing nappies”

Danny Willett said the above on his return to the UK following his shock Masters win, which made him the first British victor in 20 years. His son was born just twelve days prior to the Master success with Willett then travelling to Augusta as the last to sign up. He was the 89th man in the field, just as Jack Nichlaus had been 30 years earlier when he famously claimed his sixth green jacket.

Watch the video of the interview here 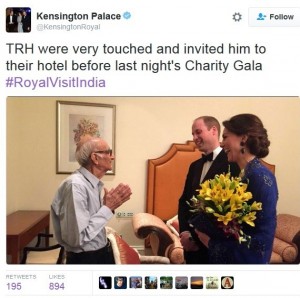 A 93-year-old restaurateur, Boman Kohinoor, created a social media campaign including a video and running hashtag to meet Prince William and Kate during their tour in India. His restaurant, the Britannia & Co. cafe is decorated in pictures of the Royals and after they heard his story invited him to their hotel to meet. 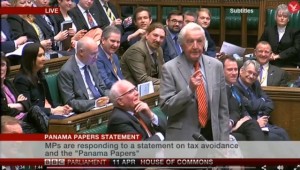 Heated debate: Labour MP ordered out of the House of Commons for calling the PM ‘Dodgy Dave’

During the prime minister’s statement on the Panama Papers 84-year-old Labour MP for Bolsover Dennis Skinner asked whether Cameron would clarify his questions about the PM’s mortgages for his two homes. He said: “I didn’t receive a proper answer than, maybe dodgy Dave will answer it now?” After being asked to rephrase or leave the Chamber Skinner said: “This man has done, to divide this nation, more than anybody else. He’s looked after his own pocket – I still refer to him as Dodgy Dave. Do what you like.” He then walked out of the Chamber.