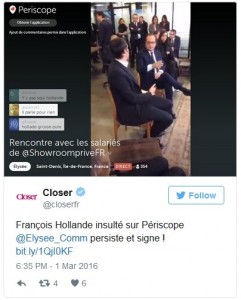 “During a public relations trip to an online fashion company in the Paris suburbs, Hollande’s media team broadcast the event in real time on the streaming app Periscope. However, his staffers failed to disable the app’s live comments option, which prominently displays viewers’ comments across the screen. Thousands of French viewers seized the opportunity to post their unadulterated opinions on Hollande as the real-time broadcast unfolded.

Insults and ridicule filled the screen immediately, mocking everything from the president’s socks to his sex life. Many users gleefully pointed out how incompetent his staffers were for not disabling the commenting feed. Others generally derided the president and his policies.”

London’s ExCeL was filled by over 550 guests who came together to celebrate and support the work of The Springboard Charity. The Big Event at Hotelympia, in partnership with Fresh Montgomery, was a huge success as the hospitality industry gathered to support the vital work of Springboard, raising £70,000. This Big Event followed the Hotelympia 10K Run on Sunday 28th February, where 270 runners staved off the cold and ran in support of Springboard.

Graphic of the Week 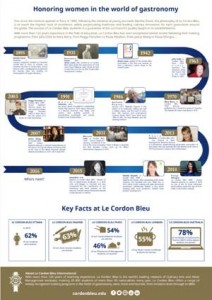 Le Cordon Bleu, the leading Global Network of Culinary Arts and Hospitality Management Institutes, celebrates the success of its Le Cordon Bleu alumnae in the world of gastronomy for International Women’s Day.

Ever since the institute opened in Paris in 1895, following the initiative of young journalist Marthe Distel, the philosophy of Le Cordon Bleu is to reach the highest level of excellence, whilst perpetuating traditions and leading culinary innovation for each generation around the globe. The success of Le Cordon Bleu students is a guarantee of the curriculum’s quality taught in its establishments.

With more than 120 years experience in the field of education, Le Cordon Bleu has seen exceptional talents evolve following their training programme, from Julia Child to Mary Berry, from Peggy Porschen to Paula Moulton, from Janice Wong to Pooja Dhingra …

Gaffe of the Week

The designers of the new National Stadium apparently forgot to include a cauldron for the Olympic flame.

And they cannot just stick it anywhere: The interior is largely lined with wood.

Officials are blaming a “lack of communications” between the government and other parties, but say they will fix the problem.

Rezidor buys prizeotel to get into the economy segment

Europe hotel industry passes U.S. in growth for the first time since 2010