The use of Romanian and Bulgarian workers in the outsourced cleaning industry, particularly in relation to their recruitment via employment agencies, is currently a topical debate. Restrictions on working in the UK for Romanian and Bulgarian citizens have led to the increasing adoption self-employment as a legal way of accessing employment opportunities through agencies. However, such a practice presents a potential moral and ethical dilemma given that there are limited protections and benefits. EP seeks to raise awareness of this issue in more detail and ask: what is the way forward?

Romania and Bulgaria joined the EU in 2007. Unlike other EU member states which have the ability to move and work freely anywhere in the EU, citizens from these nations are classified as A2 workers. This means that Romanian and Bulgarians are restricted from working in the UK unless they possess an Accession Work Card, or are in an exempt category such as teachers or language assistants. Those who endeavour to find work through an employment agency are restricted from obtaining an Accession Work Card, and this has led to an increase in the use of workers from these nations on a self-employed basis, as EU law allows a citizen of the Union to establish themselves in business in any member state. Applying this practice to the low paid sector has become a legitimate pathway to accessing jobs in the UK, but this ‘grey economy’ comes with the need for ethical consideration.

Self-employment carries no entitlement to basic benefits such as holiday and redundancy pay and pay levels can also be manipulated so that Romanian and Bulgarian workers are paid less than National Minimum Wage. Rather than paying National Minimum Wage a worker could be paid on a room by room basis and not hours worked. A BBC Newsnight investigation released in September this year highlighted these issues, focusing upon an undercover investigation into Romanian and Bulgarian cleaners at a luxury hotel who had been employed through a recruitment agency: 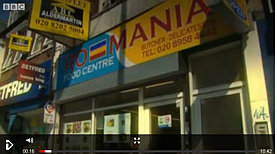 Clearly the issue impacts on other sectors, such as construction, but hospitality has been put particularly into the spotlight. The UK is one of the most popular destinations for Romanian and Bulgarian citizens; Bulgaria is the poorest country in the EU and both countries are experiencing falling populations due to emigration. In a recent Daily Telegraph article, one Romanian recruitment agency spoken to, tjobs.ro, which acts as a clearing house for all recruitment firms seeking Romanians for UK work, reported that in the past two and a half years it had advertised 81, 476 jobs in the UK, the majority of which were hospitality related; 16, 348 in tourism and hotels, and 8,650 in restaurant and catering.

The restrictions on A2 workers from Romania and Bulgaria are due to end on the 31st of December. However, according to a New Statesman article a statement issued by the UK Border Agency last year confirmed that it would apply ‘transitional restrictions’ on all new EU member states to ensure that ‘migration benefits the UK and does not adversely impact our labour market’. The Daily Telegraph report also referred to a Government report which was disclosed to show concern among official advisors that the British labour market will suffer ‘adverse effects’ as a result.

The hospitality industry has relied upon migrant workers to fill employment gaps and they provide a valuable source of labour, including typically outsourced service contracts such as cleaning.

EP spoke with Donald Flynn, director at Migrants’ Rights Network, about the issue of enforcement. He said,

“We think enforcement is key, and this is also the view of good employers and agencies. They see that certain operators put their business in jeopardy when they can undercut prices with no conscience. If a good business model could be put in place that offered decent working environments for agency workers this would afford better enforcement. Such a model does exist, the Gangmasters Licencing Authority, but this is currently limited in application to the agricultural sector and the Government are currently reluctant to extending it further.

“My view is that if more order could be brought to the sector to raise standards, and the agencies, employers and workers could see the benefits, then we would end up with a more orderly system.”

In the spotlight: ACT Clean 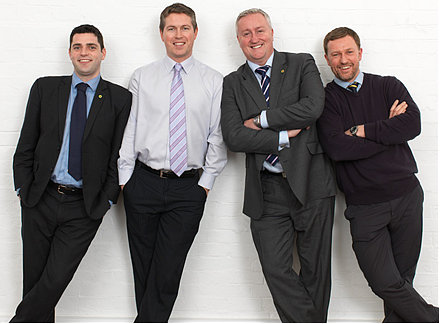 ACT Clean was established in 2006 by four founders – Robert Beaugie, Russell Stinson, John Stevenson and Paul Tocher (pictured above) – who united in a vision to deliver quality service built upon a foundation which had people development at its core. The company has an array of clients in the luxury hotel and restaurant sectors including Four Seasons, D&D London and Pollen Street Social, and they are also a partner to the Acorn Awards. Robert Beaugié, founder and compliance director, discusses the company’s views on this issue and how it seeks to develop best practice:

How does ACT Clean manage its obligations in relation to Romanian and Bulgarian workers?

Firstly, every single worker, regardless of nationality, at ACT Clean is fully employed by us. This means that we are fully compliant with all of the UK Border Agency regulations and statute relating to right to work and immigration. In this particular example it means we are working within the parameters of Accession (Immigration and Worker Authorisation) Regulations 2006. In practice, we ensure that every Romanian or Bulgarian workers has a blue card, meaning they have unrestricted access to the UK labour market, or a yellow card where those meeting certain criteria are allowed to work full time and this is clearly noted on the card. In cases where we have taken over contracts and TUPE has applied, we have found that this has not always been the practice of the outgoing supplier and that many people are ‘self employed’. In these cases we can only transfer those who fully have the right to work as an employed member of the team. We never use self employed workers.

What are ACT Clean’s views on levels of pay for cleaning staff, and in particular the practice of ‘payment by room’ rather than ‘payment by the hour worked’?

Where the team are paid at least the national minimum wage for each hour, then we can see that payment by room has its place. However doing this rather than by the hour is wrong. We would never condone payment by room only in isolation. Where this practice is applied as an incentive to drive standards and productivity and allow those who typically are paid minimum wage per hour to earn more, then we can see the advantages both to the employee and to the client. We are always delighted to look at the opportunity of paying our people more for a job well done.

One of the issues that can arise in relation to this matter is the client’s lack of awareness of the problem. How does ACT Clean seek to communicate its approach?

Because we work with some of the best and most prestigious operators in the world, largely our clients are totally aware of their obligations. What they are often surprised is to learn that some suppliers use self employed workers as a way to circumnavigate these regulations. We never do this and make our clients aware of this. Our reputation is extremely important to us, as is theirs, and we always give assurances that no action of ours would every jeopardise their good, and often long established, name. We guarantee our clients of this, and the peace of mind that working with a partner who does everything by the book brings.

What is the importance of this?

Aside from the legislative requirements to do the right thing and the risk to a business of not – not just in reputation but also to the tune of £10,000 fine for every person who is found not to be totally compliant – it’s also a moral issue for us. We pride ourselves on treating every single member of our team with respect and that has to start by doing the right thing in every aspect of the business. From when they arrive to apply to getting their first pay slip and beyond, we make sure that we do everything absolutely correctly. Our team members work very hard and depriving them of the benefits and protections that an employed person is entitled to is wrong.

What are ACT Clean’s views on the best way forward in terms of regulation of the issue?

It has to start from the point of enforcement. There is plenty, and in our opinion adequate, legislation that clearly lays out that Romanian and Bulgarian workers can only work full time in the UK when certain criteria is met. This criteria is very specific and easily measured. The UK Borders Agency have the power to investigate and prosecute where this is not the case. The tests as to whether a person is, based on their actual work activities and not what it says on a contract, employed or self employed, are very clear. It is our opinion that HMRC would likely have recourse on those companies who say they have self employed workers, who plainly are not. In this instance the government is being defrauded via the PAYE system of employer and employee National Insurance, and possibly the worker’s income tax which is an offence in itself.

It is evident that greater enforcement is needed at a macro level and that this would help to address the problems presented by unscrupulous suppliers. However, it is also clear that hospitality operators should ensure due diligence when making decisions relating to outsourcing hiring decisions in light of the current issues raised in relation to Romanian and Bulgarian workers.