Celebrating its fifth birthday and with seven stores across London, Gail’s Artisan Bakery appears to epitomize a thriving business. As an off shoot of the very successful “bread factory”, partners RAN and TOM certainly have a story to tell.
CLARE GARCIA met them to ask about the the importance of tradition and their plans for the future.

To say Gail’s Artisan Bakery owners, Ran Avidan and Tom Molnar are passionate about bread would be an understatement.

On moving to the UK, they struggled to find the ‘daily bread’ of France or Europe, instead being faced with a chemical laden, plastic wrapped alternative that, according to Ran, “It’s only by coincidence both are called bread”.

So, instead of dropping their suggestions into Greggs, they left their McKinsey & Co jobs in favor of creating a local community bakery that would bring back the age-old art of bread to Londoners.

In 2004, they teamed up with Gail Stephens, of Baker & Spice fame, but found their dream was delayed as they took over the management of Gail’s wholesale business, The Bread Factory. As Tom explains, “We came into a company with great bakers, great product and great customers, but imagine the least profitable business you can, that’s a craft business. It’s not romantic at all. There’s no reward system in place and the wrong people often get pats on the back.” 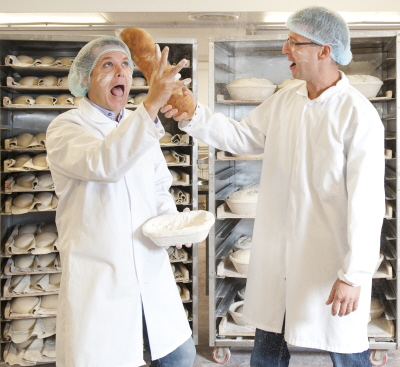 Within two years they had doubled turnover, built a new state of the art bakery and won the London Chamber of Commerce Turnaround Business of the Year award. They were now ready to resume their mission and the first Gail’s Artisan Bakery was born.

Now, I could be considered a Gail’s Geek. It’s my local coffee stop of choice and I’m yet to find a better wholesale muffin than that of The Bread Factory. But am I just buying into the cake displays worthy of an art gallery? It’s definitely a big part of the appeal. What about the Gail’s name, and what does Artisan actually mean?

There are no clear standards to use the artisan tag in the UK, hence it’s increasing popularity and perhaps subsequent ambiguity on what it promises. In essence, it’s simple; go back to the way bread was baked for thousands of years: natural ingredients, less haste and more hands…oh and a stone oven for the perfect crumb (the inner part to you and I) and crust.

According to Ran, “In Europe 70 – 80% of bread consumed is artisan or craft and only 20 – 30% industrialized. In the UK, it’s the reverse”. If we buy bread once a week from the supermarket, it needs to be “full of additives and chemicals that will keep it alive, probably after we die”. Most packaged breads contain as many as 20 ingredients, the majority of which I defy you to find in the Oxford English Dictionary. A true craft loaf contains closer to 4: flour, water, yeast or starter and salt, and any ingredients added won’t require a chemistry degree to pronounce. In fact, as Ran explains, it’s this “extensive modification of flour that makes breads harder to digest and many believe is responsible for the rise in illnesses such as coeliac. Many people can eat spelt for example, as it’s the same as it was hundreds of years ago”. Indeed, I’ve heard it said that the Roman Empire was built on spelt, but as Tom is quick to point out, “it gives a 1/3 of the yield of flour” and I wonder if this is something we are prepared to pay for.

The key to good bread is in the fermentation. It is here that the personality and flavour develop and as such, a craft bread is left to prove for up to 48 hours. A commercial loaf by contrast, can be mixed, baked, sliced and bagged in less than an hour, with the help of expanding and preserving additives and lots of machinery.Yep that’s right, from two and a half days to one hour. For Tom there’s no contest, “there’s something very simple about bread. It can be done so well, just like good coffee, if you take a little bit of care and time. And why wouldn’t you?”

By definition, an artisan is a worker skilled in an applied art, and on watching the “master bakers” it’s no surprise that on average, they’ve been with Gail’s for over 10 years. I was transfixed. While one transformed a stretch of dough into six inch strips at the speed of light, with what looked like a cleaver (no cookie cutters here!), the other magically molded future 200g ciabatta loaves, entirely with his hands. “And all to within 5g when spot checked”, Ran proudly confirms.

When they took over The Bread Factory, Ran and Tom were under no illusions that their strengths lay in procedures and “asking questions”, not in the kitchen. As Tom admits, “We weren’t bakers or chefs, so we gave [the business] a lot of respect”. 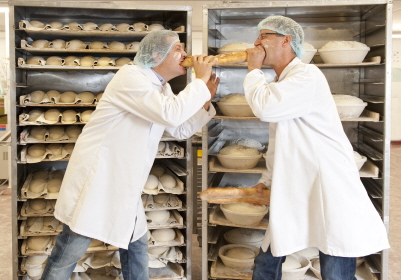 Throughout my tour of the building, the efficiency, exceptional H&S standards (no amount of cajoling from our photographer would get Tom to remove his hat for the photo shoot) and mutual deference between baker and boss is evident. But all this must come at a price and are we too conditioned to like the one stop shop sandwich bread?

For Ran it’s simple: “there’s no comparison between supermarket bread and true artisan. Just try it.” He has a point. On sourcing their 100% Rye for a restaurant, I confirmed with The Bread Factory twice that there was definitely no wheat – it tastes that good! Given that Gail’s is now in Waitrose, Ocado and HarveyNichols, along with a host of London’s top restaurants, I’m evidently not the only one who thinks so.

So what about the future? With six existing sites and another in the pipeline this year, Ran and Tom’s quest to be London’s community baker is becoming a reality. “We’re against chains” Ran is quick to point out. “We want to be a non-chain, chain, with each store retaining it’s own personality. We’ve grown organically, focusing on labour and good ingredients and want to build a brand where, when people are asked what’s great artisan bread, they say Gail’s.”

Any regrets? The smiles are immediate, “No regrets”, then Tom adds, “I’d like to have a Sunday off”.

One thing’s for certain, old fashioned style fonts, crests and packaging don’t make an artisan bread and if it takes more than 3 seconds to read the ingredients, it’s not worthy of the name. But are we prepared to pay that little bit more for quality and do we have the time for our daily bread?
Well, I’m converted. Ran and Tom’s passion for The Staff of Life is infectious and I intend to have my cake and eat it…although I wouldn’t rule out the aid of a freezer.