The philosophy behind their drinks is simple – sourcing the finest ingredients and creating soft drinks that intensify the flavour of spirits or are equally as enjoyable on their own. “It sounds a lot easier than it was,” explains Joyce, one half of the sister duo. “We were rejected many times and didn’t have any direct buys for some time. However, since we launched our traditional tonics in December last year we have been growing and are becoming the house pour, replacing other mixers/tonics on the menu.”

The popularity of the drinks may be linked to the spirit renaissance in the UK in recent years with gin becoming a more celebrated drink both home and abroad. Only last year the export of UK gin rose by mora third in four years and in 2014 reached a record £394m. Some have said this activity abroad has links the effect from James Bond films and Downton Abbey with gin having a strong, vibrant British heritage that is being enjoyed globally. On the doorstep there has been a revival of quality gin choices with class tonics that match the aspiration of a fine drink. A nod to this is the opening of the largest gin bar at Holborn Dining Room in Rosewood London Hotel (where Double Dutch features) with a collection of 400 gins in a Victorian.inspired Gin Parlour. The popularity is echoed with Hilton Hotels and Resorts in the UK where their gin bars are also going to stock Double Dutch drinks.

On how the Hilton partnership came about, they modestly explain, “We were invited to a conference in Prague attended by all Europe, Middle East and Africa Hilton General Managers. We presented our drinks, received good feedback and the opportunity came from that. We are still waiting to see where our drinks will go exactly, but they will definitely be in their Gin & Tonic bars.” 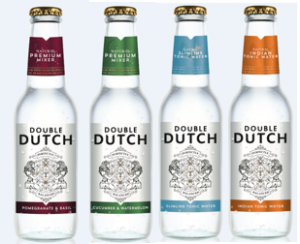 For Hilton they hope to supply more than 200,000 bottles this year alone and to use the biggest wholesaler in the UK, Matthew Clark, for the distribution and logistics involved in a deal of this kind. The company has been supplying drink products for over 200 years to on.trade premises. “Our initial struggle was securing our first wholesaler but once we did we then moved to Matthew Clark. The wholesaler is a complete necessity as we grew our business. Many simply don’t buy direct from a supplier and being part of a larger wholesaler provides us with access to other accounts.”

Double Dutch may have a wholesaler in the UK but as they expand across Europe and beyond they are finding it can be quite testing. “The first challenge we face is the need for an importer for distribution   in every country and then we can expand further. Once we have secured an importer for a country they have exclusive rights for distribution to sell to local wholesalers. Every country or us is quite different – for the UK market we focus mainly ‘on.trade’ because we want to set a premium tandard. In Switzerland it is the same, but Belgium and the Netherlands are both retail ocused,” Raissa explains. “We need large volumes to keep our costs down and also have distribution, logistics and warehousing at the right level.” Joyce adds, “We are focusing on exports and we’re lucky because it is quite an easy upfront product to export with a shelf life of 12 months and no alcohol in it.” They are clearly very proud of their accomplishments this year and now want to add to their retail outlet offering in the UK to cap an already highly successful year.

As well as expanding in Europe, Double Dutch are taking a bold move into the unknown by being stocked in Target in the US. “Winning Richard Branson’s  Foodpreneur was essential for getting into America,” Joyce explains. Double Dutch were among the winners of the Virgin StartUp 2015 Foodpreneur Festival, which celebrates the most creative, inspiring and disruptive food and drink start-ups in Britain. “We didn’t have any contacts in the US so we simply couldn’t have even started the conversation.” For the future the duo are working on their investment plans. Says Raissa, “We plan to do Series A investment at the end of this year and have already slowly started speaking to investors but are not actively looking just yet.” With the larger amount of funding they aim to create a bigger form of infrastructure in the company and build a team designed and focus on international expansion. “We are aiming for £1 million, which we believe is essential for activation plans in other countries and this will push us even further and at a quicker speed.”

As production starts in Hanover in Germany soon and their current bottling plant in Birmingham continues to produce vast quantities, the sisters do not seem daunted at all by this next step. “It’s been trial and error but we learnt from each experience. There have been mistakes a lot of knocking on doors but we are making great progress.” It is a difficult journey but with an immense future planned they believe being sisters has helped them along the way. “We’re lucky because it never becomes awkward when we disagree or argue. Even if we fall out we know it won’t be forever.”

To cap off recent achievements they aim for their drinks to be enjoyed at home as well as in bars. New drinks are also on the horizon with a fifth drink being developed aimed at darker spirits –  “a twist on ginger beer with cranberry , coconut or lemongrass”.

It’s been a powerful year for Double Dutch and now they plan to conquer even more. With delicious drinks, a smart business plan and the desire to keep going, the future is looking strong for the young entrepreneurs. It is invigorating to see them enjoying every experience and bodes well for others wanting to start on their own paths.