A fabulous fundraising dinner
with the Royal Academy of Culinary Arts
in support of Chefs Adopt a School.

Last night an exceptional group of industry leaders joined together at One Moorgate Place in an effort to support the national charity ‘Chefs Adopt a School’.Sparkling entertainment on the nigh created an exciting atmosphere in the lovely surrounding of One Moorgate Place, home of the ICA. 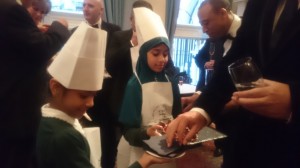 Chefs Adopt a School in action

Canapes were served by children from a local school in London that takes part in the project. The children were enthusiasts and it was a great pleasure for guests to see them in action like real professionals. Some great wines were served including the great rose Merlot-Cabernet Franc from Malbec. Bottles were kindly  offered by ex-England rugby player Simon Halliday from the charity International Sporting Wine Club. It perfectly combined with delicious canapes and helped to create a perfectly relaxed atmosphere.

Surprises continued over the night, with children singing a song before dinner. Sara Jayne Stanes, Chief Executive of the Royal Academy of Culinary Arts, greeted the room and explained the ethos behind the organisation and why they need to support food education among children. 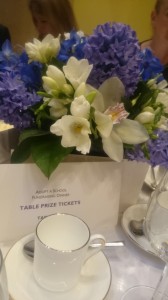 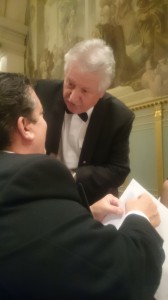 As the evening went on, it was time for the auction to start. Brian Turner CBE banged the gavel and incited the crowd in an effort to raise money to support the charity. With hands waving from every table the auction was an absolute success.

The room was full of enthusiasm, with more and more people bidding on some splendid prizes. The evening came to conclusion with a raffle, which saw many being rewarded with fantastic prizes.
The delicious menu included poached Scottish Lobster & Mango Salad and Oven Roasted Rump of South down Lamb and a range of different dessert concepts. A big applause to One Moorgate Place’s chefs was the most natural conclusion to the evening. 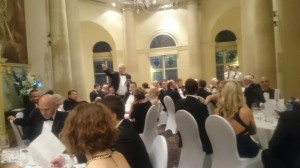 The evening in tweets

Watch a video of the children singing 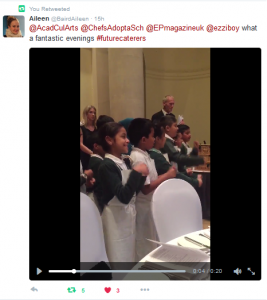